In Honor of the Montana Malamutes ~

Dear furiends, pops received this on his facebook wall today and wanted to repost it here. Generally, we don't do a lot of reposting, but this one really touched us. Our last transport was one of these malamutes. Merry Christmas dear furiends ♥ 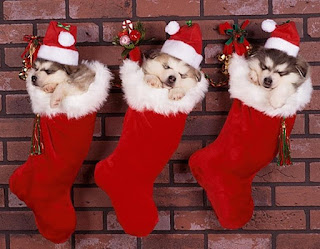 
Twas the night before Christmas
when all thru the house

Not a creature was stirring
not even a mouse.

The stockings were hung by the chimney with care
In hopes that St. Nick soon would be there.

The children all nestled snug in their beds
With no thought of the dog filling their head.

And mom in her kerchief and I in my cap
Knew the dog was cold, but didn’t care about that.

When out on the lawn there arose such a clatter
I sprang from the bed to see what was the matter.

Away to the window I flew like a flash
Figuring the dog was free of his chain and into the trash.

The moon on the breast of the new fallen snow
gave the luster of mid-day to objects below.

When what to my wondering eyes should appear
But Santa Clause with his eyes full of tears.

He unchained the dog once so lively and quick
Last year’s Christmas present now painfully sick.

More rapid than eagles he called the dog’s name
and the dog ran to him despite all his pain.

Now Dasher, now Dancer, now Prancer and Vixen
On Comet on Cupid on Donner and Blitzen.

I knew in an instant there would be no gifts this year
For Santa had made one thing quite clear.

The gift of a dog is not just for the season
We had gotten the dog for all the wrong reasons.

A dog should be family, and cared for the same
You don’t give a gift, then put it on a chain.

And I heard him explain as he rode out of site,
“You weren’t given a gift, you were given a life.”

Dang nabbit! You made me cry!! What a wonderful poem. Thank you for posting this.
Licks and wags and a Merry Christmas to all.
Chuy and the furgang

This made Mummy Janey cry...but we'd sure love a stocking like those!
The Maple Syrup Mob
xxxxx

So beautiful. Yep MOM has tears in her eyes.
Blessings,
Goose

What a fantastic post, wish I had a stocking with one of those cuties in it :) xx00xx

RA! pawsome post!! Rumpy Dog made the point in a post about this is not the time of year to gift animals...and this poem is just great! Paw pats, Savannah peeEss play bows for Nanuk (my Got'Cha day buddy) and Isis and nose rub for Mr Mark

Thank you for the wonderful poem!
Arno

What a perfect reminder! Thank you for this poem remembering that life on a chain isn't living.

Sniff sniff that brought a tear to my eye lovely and sad too,xxSpeedy's mum

Thank you for sharing ^^
Woos of love.

What a moving poem, we had a quiet sniff or two here.
Finn